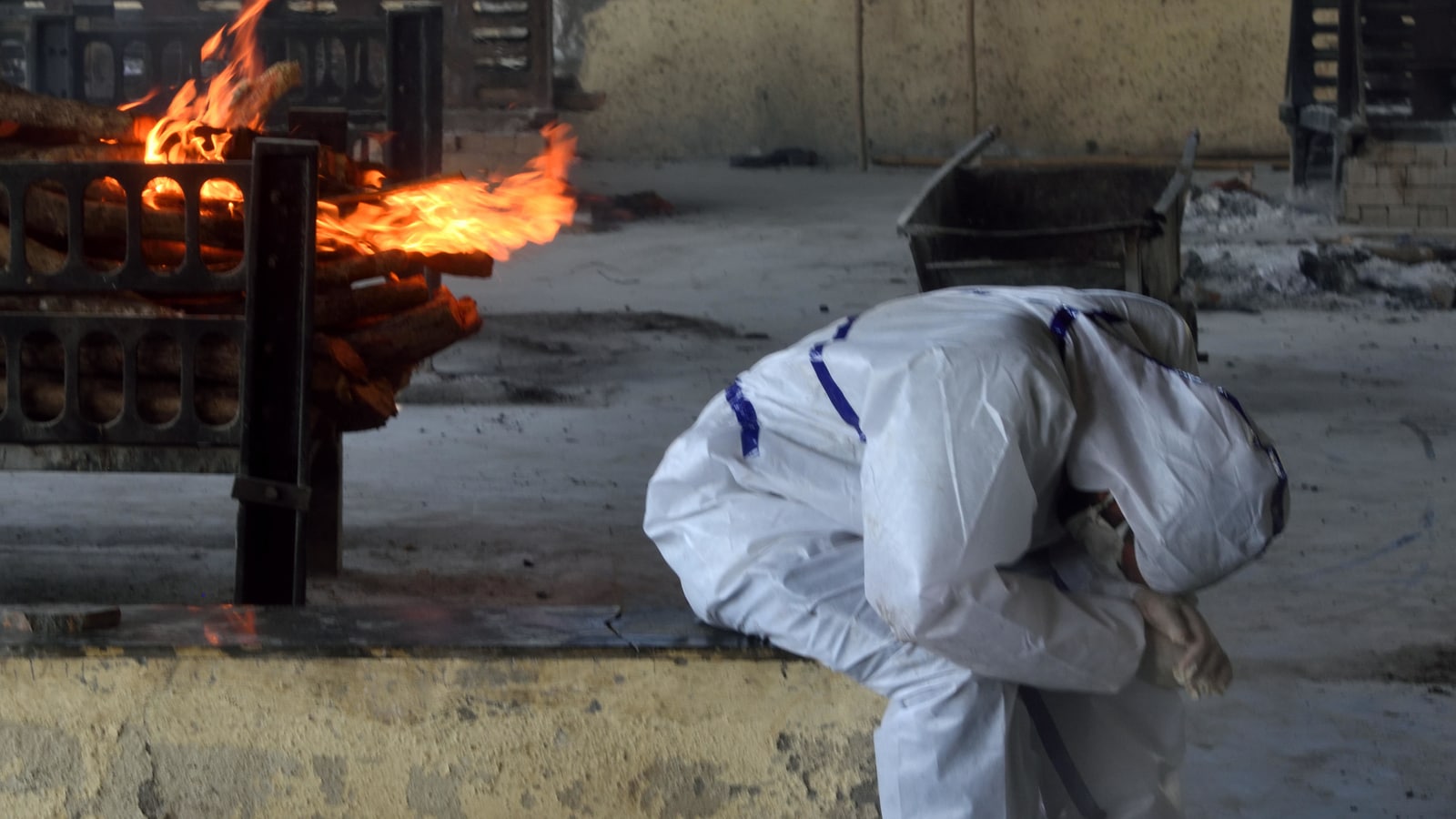 India is currently in the grip of a second wave of the Covid-19 pandemic, far worse than the first wave. As more states go under complete or partial lockdowns, economic activity is bound to take a hit. In our report, State of Working India 2021: One Year of Covid-19, we analysed data from 2020 to investigate how the pandemic impacted vulnerable households, whether the policy measures enacted thus far were effective, and what more can be done.

Statistics from Consumer Pyramids Household Survey of the Centre for Monitoring the Indian Economy (CMIE-CPHS) suggest that India’s first national lockdown, one of the most stringent in the world, resulted in a loss of employment for around 100 million workers during the months of April and May 2020. 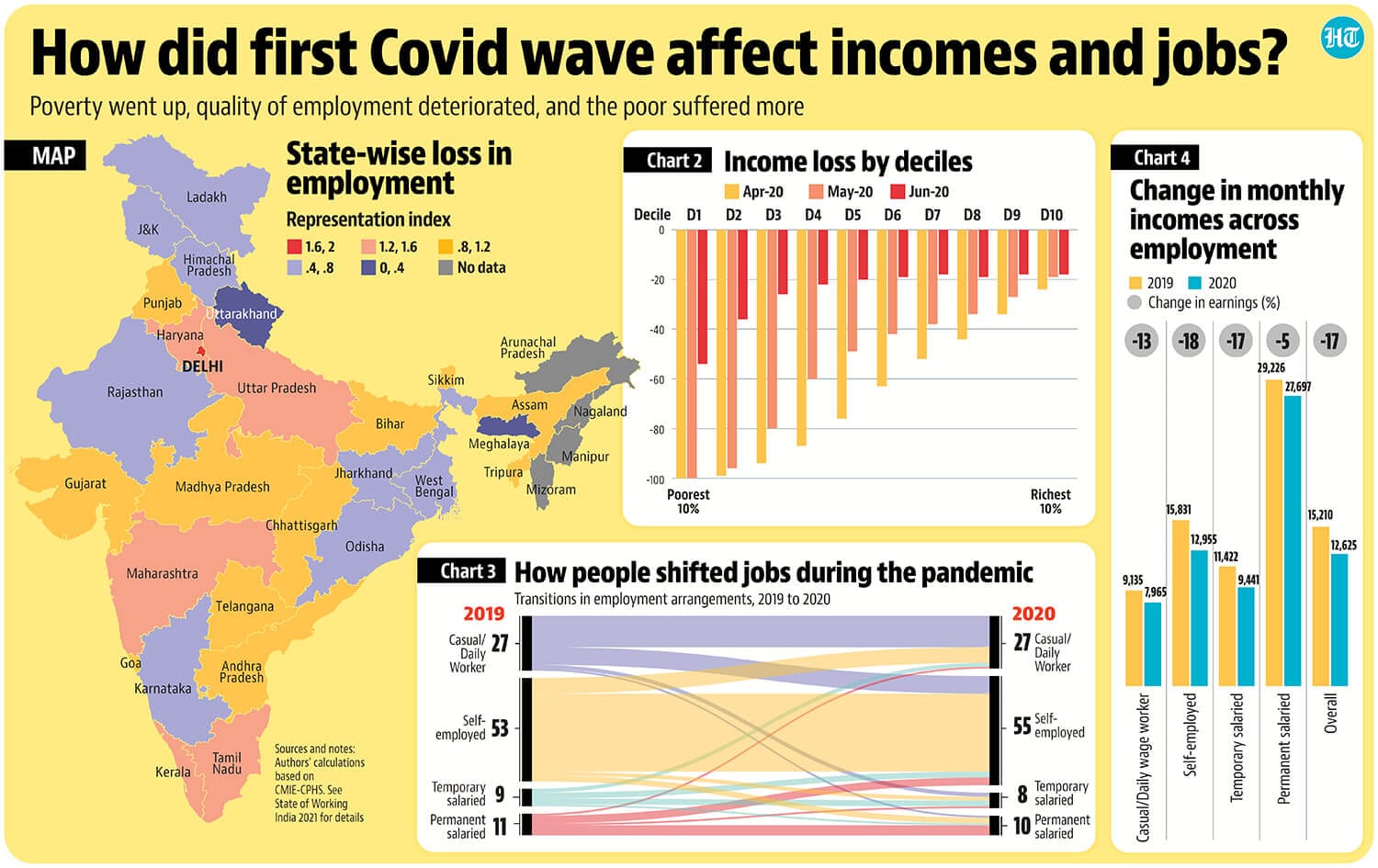 This week, the Centre for Monitoring Indian Economy has released employment data for January to April of 2021. These data show that employment recovery has stagnated with the employment rate remaining at 93% of its pre-pandemic value for men and 73% for women.

The job loss and fall in earnings (more on this later) caused a large increase in poverty. We calculate income poverty using the recommended National Floor Minimum Wage (Anoop Satpathy committee) of Rs.375 per day as a threshold. Compared to the pre-pandemic period, the number of individuals below this poverty line increased by 230 million. In proportional terms, the poverty rate has increased by 16% in rural areas and 20% in urban areas.

Job losses were higher for states with a higher average Covid-19 case load. Figure 1 shows a state-level job loss representation index, or the ratio of the state’s share in jobs lost between 2019 and 2020 to its share in India’s workforce. Delhi, Maharashtra, Kerala, Tamil Nadu and Uttar Pradesh, contributed disproportionately to job losses. These are also the states with a high share of Covid-19 cases.

Mobility restrictions as well as voluntary reductions, due to fear of infection, led to income losses. Google Mobility data at the state-level put together with CMIE data on household incomes allows us to calculate the impact of decreased mobility on incomes. Delhi, for example, experienced a 50% decline in mobility on average between March and October 2020 and this was accompanied by a 39% loss in income. On average, we find that a 10% decline in mobility was associated with a 7.5% decline in income. This number is useful to keep in mind as states impose or contemplate imposing additional lockdowns. (See Map)

The pandemic’s economic impact was regressive in nature

The loss of work during the lockdown and after resulted in reduction of earnings for many and the complete evisceration of incomes for some, specifically, the poorest. The bottom 20% of households earned nothing in the months of April and May 2020. On the other hand, the top 10% suffered the least during the lockdown, and only lost about 20% of their February income during the lockdown months pointing towards the clearly regressive economic impact that the pandemic has had. (See Chart 2)

As workers struggled to find work, many took recourse to less desirable fallback activities. Only 47% of salaried workers have been able to remain salaried over the course of the year. We reported similar trends in earlier months in these pages. Nearly 30% of formal salaried workers had to resort to self-employment and a further 10% have moved into daily wage work. This is unlike anything seen in normal times. Between 2018 and 2019, 80% of permanent salaried workers remained in the same employment arrangement.

As a result of job losses and informalisation, incomes fell for all types of workers — salaried, casual and self-employed. (See Charts 3 and 4)

This in turn increased food insecurity and indebtedness. Over 90% of respondents in a random survey carried out in Karnataka and Rajasthan reported having borrowed money sometime between April and August. The mean loan amount was Rs.26,300 and the majority borrowed from informal sources.

The report also examines the reach and efficacy of government relief measures. As reported earlier in these pages, we find that even though PDS had a much wider reach than Jan Dhan accounts, the efficacy of the Pradhan Mantri Garib Kalyan Yojana was similar for both, and around 40% of eligible households were excluded from the support.

As India confronts the second wave and what is possibly its worst humanitarian crisis in recent years, urgent policy measures are needed to support an already beleaguered population.

The extra PDS entitlements under PMGKY need to be extended till the end of the year. We recommend cash transfers of Rs.5,000 for three months to as many vulnerable households as can be reached with the existing digital infrastructure, including but not limited to Jan Dhan accounts. MGNREGS has played a vital role and its allocation needs to be expanded. A pilot urban employment programme analogous to it can be launched in the worst hit districts, possibly focused on women workers. And a Covid hardship allowance of ₹30,000 ( ₹5,000 per month for six months) should be announced for 2.5 million Anganwadi and ASHA workers who have been at the frontlines of the grassroots fight against the virus.

These measures are important because the crisis has caused nutritional and educational deficits, as well as increased inequities in the labour market with the scarring effect of job loss on women and young workers. It is likely that many of these deficits will be faced disproportionately by the most vulnerable and poorest households.