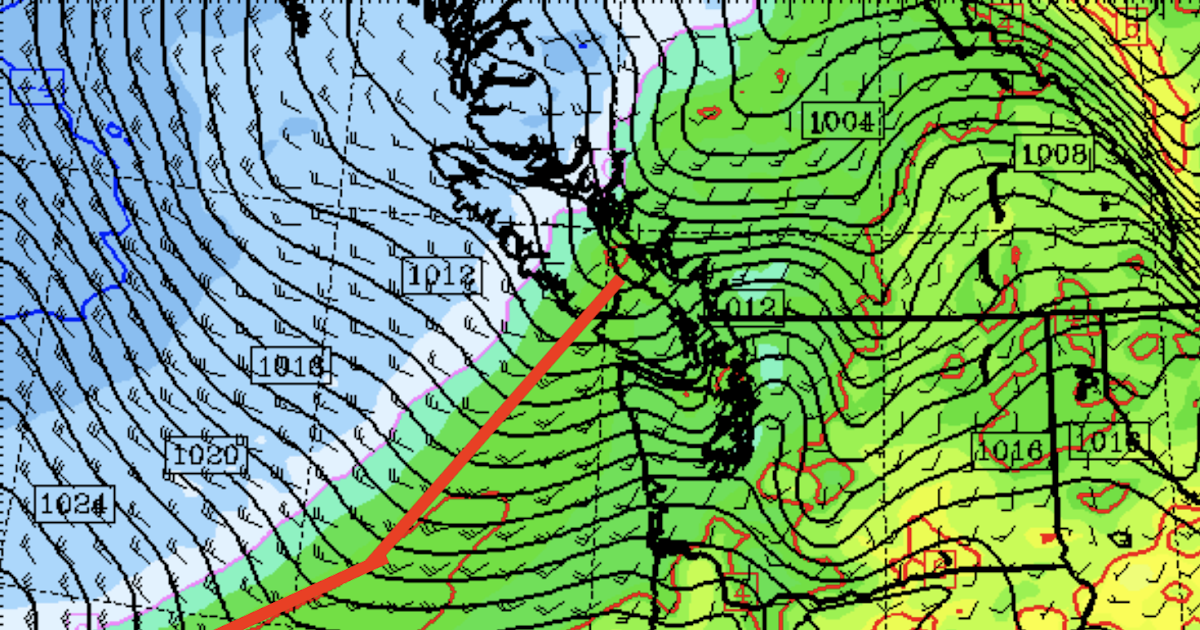 A powerful Pacific front is bearing down on Washington State, reaching the coast tomorrow morning.

Behind the front is unusually cool air for late March, cold enough to bring snowflakes to the higher hills of the region, and bountiful snow in the mountains.  And there will be winds.

The first weather map, valid for 8 AM Sunday morning, shows the front (red line) offshore.  That front is in a region lower pressure (a pressure trough) and you will note much cooler (bluer) air behind.  Also, note the large north-south pressure difference across western Washington…that means winds. 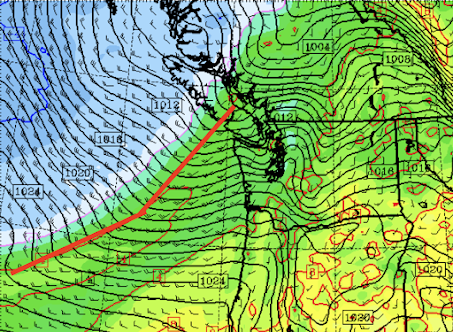 By 11 PM Sunday night, quite cold air pushes across western WA and Oregon, and is well into eastern WA. 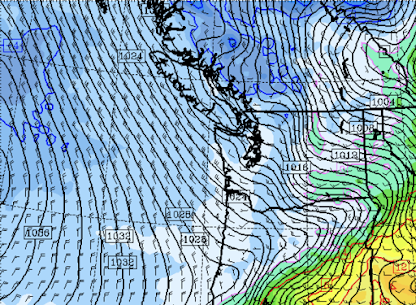 And the forecast for 11 AM Monday, literally brings chills down my back, with primo cold air in BC and the whole Northwest under unseasonably frigid flow.  Protect your outside plants on Monday morning, particularly anything new you had just put outside. 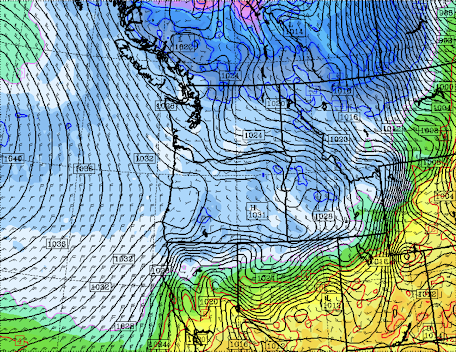 As the front approaches, the winds will greatly accelerate.  Here is the latest guidance from the UW/City of Seattle WindWatch website showing the predicted wind gusts over Seattle over the next few days.  The red color shows the winds from the UW high-resolution system and the green is the National Weather Service forecast.

We are talking about gusts getting to around 40 mph….enough to promote some loss of branches and scattered power outages. 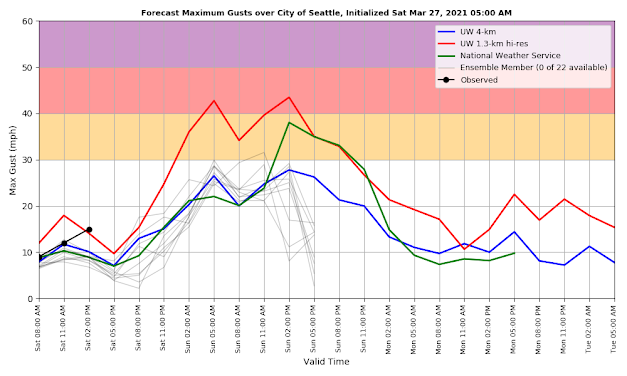 But the real wind action will be in the Strait of Juan de Fuca and northwest Washington….and it will be a play of two acts.

But the second act will be even more dramatic, as a powerful westerly (from the west) wind surge moves down the Strait behind the front (see predicted surface winds and pressure at 5 PM Sunday).

At the leading edge of this surge there will be a line of convective clouds and most likely thunderstorms, something shown by the predicted simulated radar image at 1 PM on Sunday.  The red arrow shows the heavy precipitation at the leading edge of the surge through the Strait.  The yellow arrow points to the front moving in off the ocean.  Note how the front is weakened by the Olympics.

My recommendation…..don’t hand around outside tomorrow afternoon….it will be intense.

As the front goes by, the snow level will plummet to around 1000 ft Sunday night and Monday morning…with a good chance of some flakes reaching the high hills of western Washington.

But the real snow action will be in the mountains, as cold, unstable air brings Cascade snow, with amounts as much as a 1-1.5 ft possible (see snow accumulation through 2 PM Monday)

La Nina springs….you got to love them.

Why are their contrails in the sky? And the weekend forecast. All in my latest podcast

A Cold Spring That Won’t Go Away