As the northern plains brace themselves for rain and snow (and hail) later this week (between February 13 and 15) and, potentially, early next week (February 18), both on account of western disturbances, scientists at the India Meteorological Department (IMD) are surprised by the number and intensity of these weather phenomena — storms with cold air at their core that originate in the Mediterranean region and bring rain to north and northwestern India.

The western disturbance (WD) that will hit India later this week is this season’s 10th, and the one that the country will experience the week after is the 11th. On average, India sees five, maybe six, western disturbances every winter. This year, there have already been nine. And some have been very intense.

“This year, we are seeing an intensification of WDs, with the one last week being the most intense one. This happens when there is a significant temperature difference between the northern and southern latitudes, say for example, between Europe and northwest India. We are not expecting an intense cold spell again because we are already in mid-February, but temperature will dip slightly even in the plains after every western disturbance,” said M Mohapatra, director general of meteorology at IMD.

IMD has predicted widespread snowfall in western Himalayas and hailstorms and thunderstorms in the northern plains along with a slight dip in temperature later this week on account of the western disturbance.

The one expected next week could cause a further cold snap.

The western disturbance beginning February 13 will bring “scattered to fairly widespread rain and thundershowers and isolated hailstorms” over plains of northwest India and central India between February 13 and 15 with heavy rainfall likely over some places in Punjab and northern parts of Haryana and Chandigarh on February 14. The rainfall is likely to shift towards eastern India from February 15 onwards. The disturbance will also bring widespread snowfall with heavy falls in some parts of western Himalayas.

The minimum temperature in Delhi is already in the range of 7-8 degrees Celsius, and this will reduce by 2 to 3 degrees after the disturbance on February 15.

“The weakening of the polar vortex is leading to a higher temperature gradient between the north and southern latitudes. This creates more low pressure systems and extreme weather,” said professor Manju Mohan, Centre for Atmospheric Sciences, IIT Delhi. 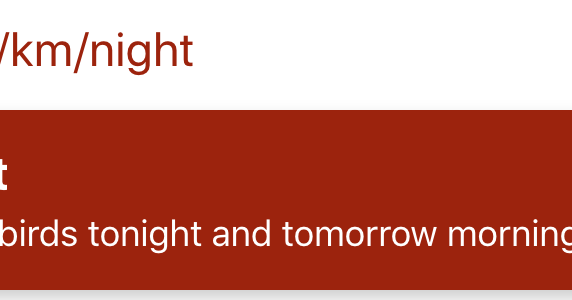 Bird Migration Alert, Huge Ridge Ahead, and my 101 Course

New Podcast on the Latest Forecast and Atmospheric RIvers

Lesson of the Day: ‘Kids Need Superheroes Now More Than Ever’

Your Running Shoes Might Actually Increase Your Risk of Injury, Scientists...

Lesson of the Day: ‘Kids Need Superheroes Now More Than Ever’

Your Running Shoes Might Actually Increase Your Risk of Injury, Scientists...