Hi-tech Chinese ships have been detected near Manus Island as the United States and Australia begin naval base upgrades closeby.

The deployment of Chinese ships to waters near Papua New Guinea has sparked concern as experts believe any information gathered by the Chinese surveys could be crucial in any future maritime conflict with the United States. The deep-water Chinese scientific surveys are part of Beijing’s unprecedented oceanographic research of the Western Pacific, in an area experts believe could be crucial in any future maritime conflict with the US. The ships involved, the Ke Xue and Hai Ce 3301, are part of a two-dozen strong Chinese “Distant-Ocean Research fleet” that has conducted expansive maritime surveys around the Philippines, Palau, Guam and Japan over the past two years. According to a December 23 report, the “even spacing between legs in Papua New Guinea’s EEZ indicates bathymetric data collection” taking place. GPS satellite data reveals two Chinese research vessels mapping waters in PNG’s Exclusive Economic Zone (EEZ) north of Manus Island, two weeks after US vice President Mike Pence announced the redevelopment of the Lombrum Naval Base.

A retired two-star admiral who once headed Australia’s Border Protection Command believes Chinese mapping of the world’s oceans is now on the same scale as Soviet maritime operations during the height of the Cold War.”It’s very similar to the pattern of Soviet Union behaviour in the 1960s, 70s and 80s and the Soviets’ knowledge of the world’s oceans was really quite enormous,” says Rear Admiral James Goldrick. The former naval officer, who is now an adjunct professor at the Australian National University’s Strategic and Defence Studies Centre, says the full extent of China’s maritime surveys in this region is still not known. “Chinese naval intelligence gatherers will not be shining a (GPS satellite) beacon, they’re not required to by law, and of course it’s quite possible some of the government-owned ships aren’t always radiating on their beacons to show where they are and who they are.”

A Memorandum of Understanding was signed last month by Defence chiefs from Australia and PNG, a guide to the joint upgrade of the Lombrum Naval Base. 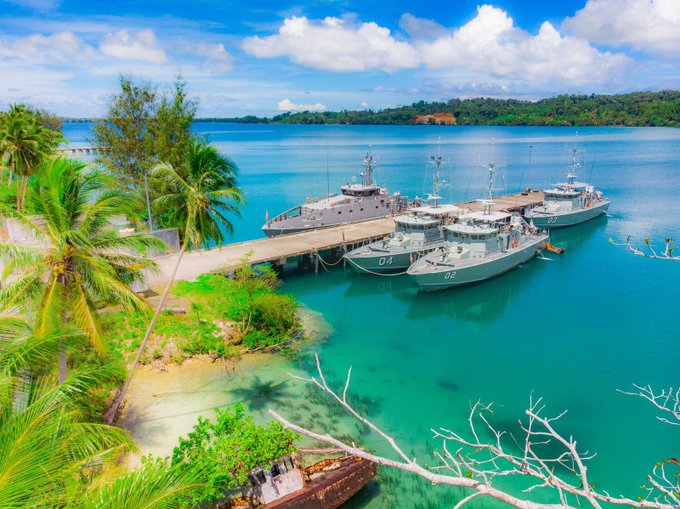 One
Guardian Class and three
Pacific Class Patrol Boats at Lombrum Naval Base on Manus Island. Investing in #PNGDF capacity to secure PNG sovereignty is a key aspect of the enduring #PNGAusPartnership.

The Federal Government says the increased cooperaion at the PNG Defence Force base in Manus Province is a “natural extension of our longstanding and collaborative Defence partnership”.

The scale of the US commitment remains unclear, with Mr Pence refraining from revealing how much money the Trump administration would contribute to the project, or whether American vessels will be based at Lombrum permanently.