A creative competition and a panel of high-profile ambassadors, including Angus Imrie, the actor who plays Merin in ‘The Kid Who Would be King’ on screen, are being recruited to keep children inspired over the summer

21st July 2021: A new national survey of 638 parents of two to eight year olds released today reveals that their children’s lack of social interaction and isolation during lockdown was by far the biggest concern. Symptoms of a knock-on effect on children’s mental health included a rise in tantrums (36% strongly agreed or agreed) and less communication and lowered concentration (36% strongly agreed or agreed). Battling with screen time was also a daily struggle for parents (agreed 43% of parents). The Internet was important for children, however, keeping them in touch with their friends via zoom. Zoom playdates and skype calls were popular. 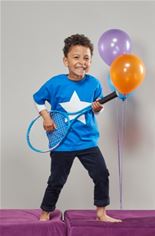