Prime Minister Narendra Modi was conferred the ‘Global Goalkeeper’ award by the Bill and Melinda Gates Foundation for the Swachh Bharat Abhiyan launched by his government. In a series of tweets in Hindi, the Prime Minister’s Office (PMO) said Mr. Modi lauded the countrymen for contributing to the grand success of the cleanliness mission, saying he shared the honour with them.

“I’m extremely grateful to the United Nations (UN) for this programme & issuing a special commemorative stamp to mark the 150th birth anniversary of Mahatma Gandhi” says Modi. He says ,”Gandhi ji never tried to create influence through his life but it became a source of inspiration. We are living in the era of ‘how to impress’ but Gandhi ji’s vision was ‘how to inspire’. He dedicated the award to those Indians who transformed the Swachh Bharat campaign into a “people’s movement” and accorded topmost priority to cleanliness in their day-to-day lives.

I thank all those who came for the special programme at the ÚN on the relevance of Gandhian thoughts: PM

The world comes together to pay homage to Mahatma Gandhi on his 150th birth anniversary!

I thank all those who came for the special programme at the @UN on the relevance of Gandhian thoughts.

In the august presence of various world leaders, a stamp on Gandhi Ji was released. 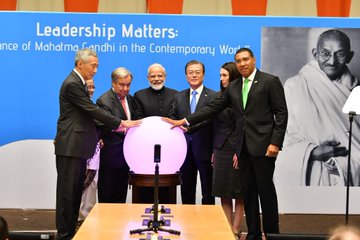 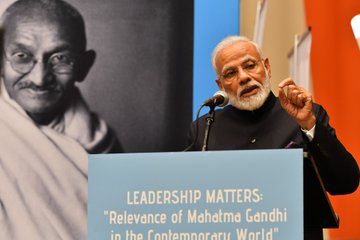 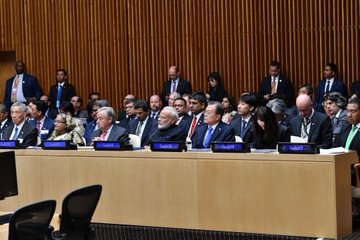 Mr. Modi said he was told that the Bill and Melinda Gates Foundation had also reported that as rural sanitation had improved in India, it had led to a decline in heart problems among children and improvement in the Body Mass Index (BMI) among women. Expressing happiness that Gandhi’s dream of cleanliness was about to be fulfilled, he said, “Gandhiji used to say a village could only become a model when it was completely clean. Today we are heading towards making the entire country a model.” The cleanliness campaign was launched by the Modi government during its first term on October 2, 2014.

New Study Investigates That Saturn’s Moon And Its Nitrogen Bubble