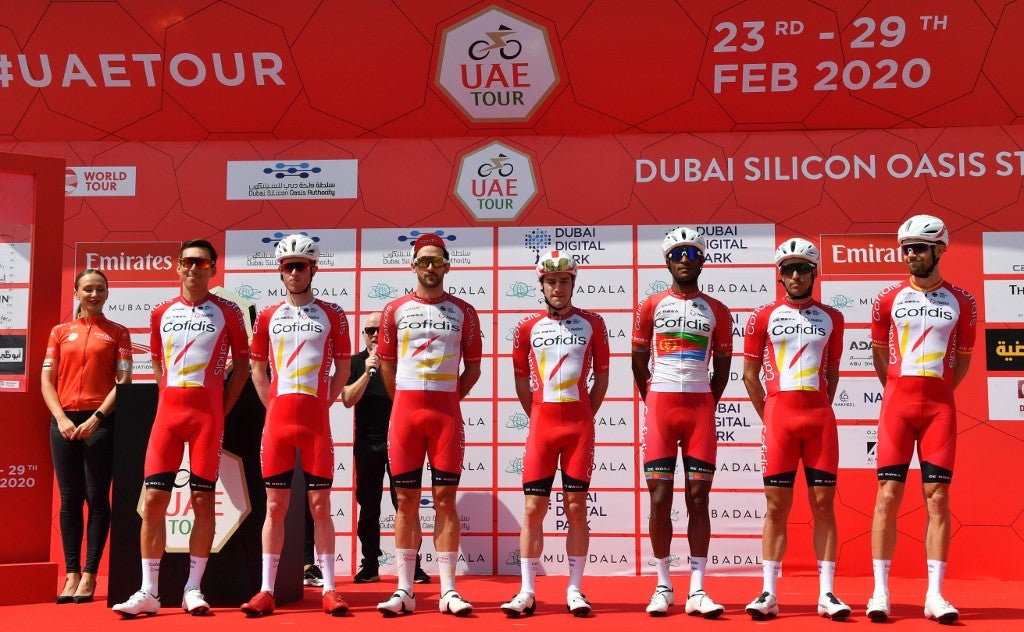 Team Cofidis of France pose before the start of the first stage of the UAE Tour from the Pointe to Silicon Oasis in Dubai on February 23, 2020. (Photo by Giuseppe CACACE / AFP)

The head of a French cycling team quarantined in Abu Dhabi since last week’s aborted UAE Tour said on Tuesday riders felt like victims of a “hostage-taking”.

Most of the 20 teams who took part in last week’s UAE Tour, cut short after two Italian officials tested positive for the coronavirus, have been allowed to leave Abu Dhabi.

But three teams, Cofidis and Groupama-FDJ of France and Russian outfit Gazprom, have been held in quarantine on one floor of their Abu Dhabi hotel since the race ended Thursday.

A fourth team, UAE Emirates, has opted to stay behind voluntarily.

Thierry Vittu, the Cofidis president who is with the team in the hotel, said it was like a “hostage-taking”.

“We are being held against our will at a place which is not of our choosing and for an unknown period of time,” he said on Facebook.

“That last part is the worst to deal with.”

Several sources said the three teams were being held in quarantine because a person on the same floor in the hotel had tested positive for the virus.

“We are treated as if we have the plague, our rooms haven’t been made up in five days and we have to go to the lift to pick up sheets, soap and towels,” said Vittu.

Some members of the Cofidis team were struggling to cope with the conditions, he said.

UAE authorities have said they are awaiting the outcome of a second series of tests before allowing the teams to depart.