“A combination of factors, including easing cross-border tensions and the expectation that the ruling combine will gain mileage out of the swift action across the border, has worked in India’s favour.

The opinion polls that came during the weekend suggest that the NDA is coming back. So there is an expectation of continuity of policies and the measures that have been taken so far will yield fruit in the next few years,” said U R Bhat, MD, Dalton Capital Advisors.

Reliance Industries, the country’s most valuable company, climbed to a new all-time high. The shares of the company rose 2.22 per cent to end at Rs 1,329. The Bank Nifty also recorded a new all-time high led by gains in private sector banks.

All the 19 BSE sectoral indices ended with gains, with the exception of the BSE IT index. The market breadth was positive on Tuesday, with 1,653 stocks gaining and 1,071 declining. Around 67 companies touched their new one-year high. The NSE Smallcap 100 index rose 1.3 per cent, while the NSE Midcap 100 index underperformed, gaining 1.5 per cent. 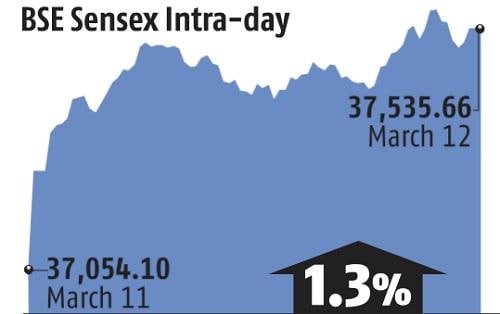 FPIs have poured nearly Rs 30,000 crore into the Indian markets since February 20. The Sensex and the Nifty had declined to their 2019 lows on February 19. Since then, both the indices have rebounded over 6 per cent, thanks to aggressive buying by overseas investors. From the 2019 lows, the NSE Midcap 100 and NSE Smallcap 100 indices have jumped 11 per cent and 16 per cent, respectively.

Experts say the US Federal Reserve’s decision to put interest rate hikes on hold was behind the latest impetus towards equities. The Fed announced a pause in the rate-hike cycle on January 31, following which most EMs have seen a surge in foreign flows. India was late to join the party due to lingering domestic problems. Market experts said India could not participate in the global rally due to many local factors, including issues in the wholesale financial market, geopolitical tension, and political uncertainty.